The 4th Ypres Memorial Tattoo is again organized this year by the Last Post Association and “Ypres Surrey Pipes & Drums” on Sunday the 28th of September at 4.00pm in Ypres market place in the shadow of the famous cloth hall.
It is almost one hundred years ago that thousands of troops in and around Ypres fought a fierce struggle, resulting in human tragedy of gigantic proportions, were troops of all nationalities paid the ultimate price.

Ypres managed to resist occupation, but it meant four hard long years of fighting, Much of Ypres and its community were completely destroyed. ‘The Cloth Hall’ the venue for the Tattoo remained rising like a phoenix from the ashes.

A war photographer described the scene in September 1917: “The tower is now a pretty pathetic lot of bricks, scarred and full of bullet holes. There is no trace of the once beautiful sculptured walls they are now just a mass of shrapnel, The statues are decapitated and the beautiful carved pillars and columns lie like fallen giants across the mangled remains of roofs and other structures above. Oh, it’s terrible thing.”

During the war hundreds of thousands British and British Empire troops marched through this grand place past the ruins of the Cloth Hall, the Meensestraat and the Menin Gate on their way to the front line.

A description by an eyewitness of the time: “It was terrifying at night to walk through Ypres, there were the emaciated remains of houses and the ruins of the once impressive Cloth Hall towered over the empty square … the only sound came from the echoing footsteps of troops in the deserted streets and the soft murmur of hushed voices … we left the city behind us with feelings of great relief.”

After years of planning the two organizations got together to form the first ‘Ypres Memorial Tattoo’ in 2010 at this historic venue.

The aim of the organizers is to keep alive the memory of the soldiers who fought in the Ypres campaign restoring the freedom of the city and independence of our country.

The Tattoo will take everyone back a hundred years to the time of the Great War, with the sounds of the march bands, pipers and drums. 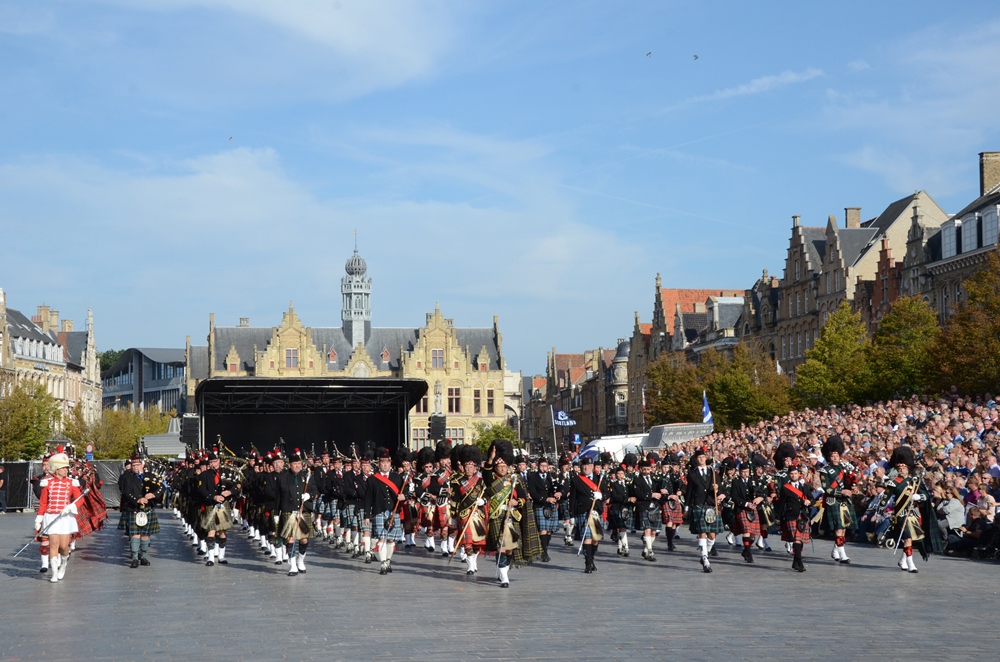