Nowadays, there is much talk about the need for solidarity. Europe is in crisis. As recent events in Paris and Brussels have so tragically shown, some elements of our way of life seem under threat. Only solidarity can save us, or so we are told.

In 1914, Europe was also in crisis. Then, too, many of the most important elements of our way of life – justice, democracy, freedom – were also under threat. Once again, the only hope of salvation rested in a united response and a united effort by the nations who believed in the same fundamental values. In short, the Europe of 1914 also needed solidarity.

In these grave circumstances, no nations showed a greater sense of solidity, a greater willingness to help others without thinking of the cost to themselves, than the peoples of Australia and New Zealand. Their young men travelled half way a round the world to fight in a conflict that many would say was not really theirs, for no other reason than they simply believed it was the right thing to do. This was true solidarity indeed. But solidarity – whether in 1914 or 2016 – is not always easy. It comes at a price. 62,000 Australians and 18,000 New Zealanders never went home. Today we honour their sacrifice, their courage and their selflessness, as we do each ANZAC Day.

But we also remember that solidarity and sacrifice, however painful at the time, can also lead to a better world and a better future for us all. The harsh experiences in Gallipoli and on the Western Front helped to make Australia and New Zealand the proud nations they have become today. These same harsh experiences also helped to forge the bonds of friendship between the peoples of Belgium, Australia and New Zealand, a friendship which once again finds its expression in this annual ceremony. May the example of those who fought and died here nearly 100 years ago continue to inspire us, so that we too might show similar courage and similar determination to stand up for what we believe in and to help those who are worthy of our support. If we do as well as the ANZACs, the Europe of the future will have nothing to worry about. 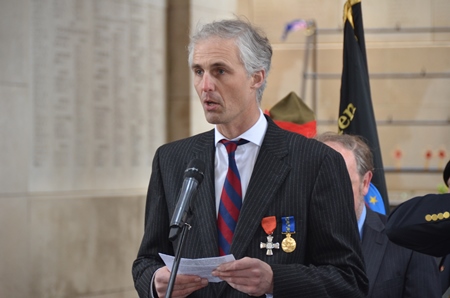