Christophe Wils: How I became bugler

A very good friend whom I have known since childhood was a member of the youth fire brigade, then going on to follow a course to become a fireman. The idea to present myself as a candidate to become a voluntary fireman also appealed to me. From time to time I was allowed to join the exercises to gain an understanding of what would be expected of me as a voluntary fireman, very quickly I realised that this was something that I wanted to do.

During that period I was also an active member of the Scouts in Ieper. As leader of the Scouts I recognized and valued the social aspect, interaction and teamwork that were involved, which could be said were the same qualities required for a fireman.

I passed the student (apprentice fireman) course and my career as a voluntary fireman began. At the age of 20 saw me commencing with the Ieper Fire Brigade. In hindsight when I started never would I have dared to say at that point how much the Fire Brigade would come to mean in my life. One way or the other, every day I was busy with it and I followed the one training college after the other. Training in being specially motivated to take and give responsibilities.

As a tradition it is generally known among firemen of the Ieper Fire Brigade that every evening a few volunteers make time to sound the Last Post during the daily service, at that stage that was it, until my very good friend Jan Callemein started to sound the Last Post as a bugler under the Menin Gate. During our weekly bike ride and on other occasions he would tell me a lot about the Last Post Ceremony.

I have to confess that the Last Post Ceremony to me was only a known fact, but suddenly my whole attitude towards this daily service completely changed. I started attending the service, which I am ashamed to say, had never done before.

During this time the realization hit me that being someone from Ieper, this was the least that I could do in return for all those fallen men and often fathers of young children and what they had given to us in returning to us the freedom of our country and hometown. This thought constantly kept me thinking about the Last Post along with Jan rousing and encouraging my interest.

When, roughly a year ago I was suddenly asked if I would be interested to join as a bugler I did not hesitate in my response for one moment. Convincing the “home front” however, was a different matter though! Prior to presenting myself to the Last Post Committee, during one Last Post service I went to see the Senior Bugler, Antoon Verschoot, to obtain his personal blessing, another tradition that has held fast. Anton is a well-established name amongst the buglers having sounded the Last Post for an impressive 57 years. He still vividly recalls the times when the Last Post was sounded by one or only two buglers under an empty Menin Gate, something unheard of today! Respect is very much the key word here.

The “all clear” was given and very quickly a meeting was arranged with Benoit Mottrie, Chairman of the Last Post Association, as a result shortly after this in the presence of Benoit Mottrie, Antoon Verschoot, Jacky Platteeuw and my friend, Jan, I was given my bugle with all required accessories.

This is when the real work started: practice, practice and more practice until you ran out of breath or when your lips were numb. After a lot of patience from Jan assisting in my practice I was ready to sound the Last Post and Reveille under the watchful eye and ear of the “Boss.” I received the go ahead from Antoon and the approval to sound my very first Last Post under the Menin Gate.

I cherish the choice I had made to become a bugler everyday more and more. All buglers are good, close friends with each other, also outside the ceremonial aspect importantly we all get along extremely well together.

Many people who we meet all have their own story to relate. They tell us how much they respect us for what we do, in turn we should respect them and especially their relatives who came here to fight and subsequently those that died for us.

Every Last Post I sound is special, there is never an occasion where it does not fail to move me and when there are bagpipes a shiver runs through my spine! 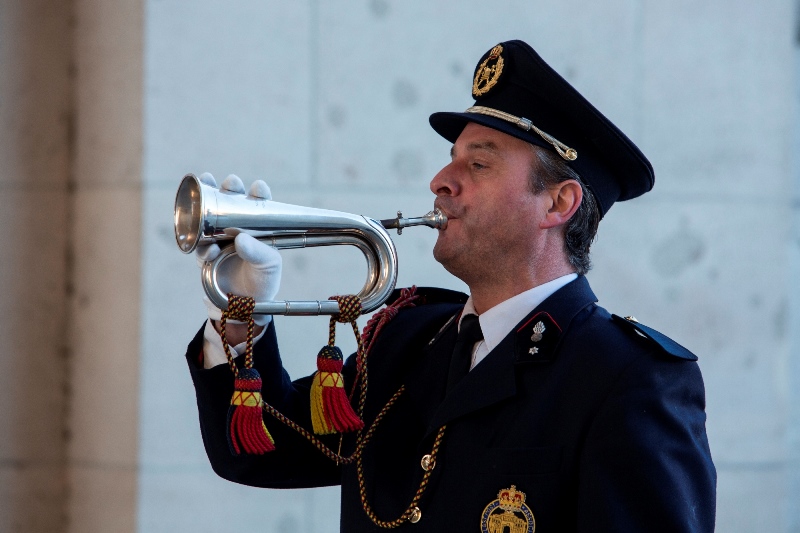