Each year, the Ypres Cultural Counsel awards a Cultural Trophy to a deserving person or organization in Ypres. The Culture 2009 Trophy is awarded to Antoon Verschoot, which was proposed by the New Ypres Revue Theatre. At the ceremony of the Cultural Trophy on January 25, 2010, the winner will be honoured by all members of the arts council. The trophy is a ceramic sculpture by Stijn Yperman, teacher at the Academy of Fine Arts in Ypres.

Antoon Verschoot (“Toontje”) was born in Ypres in 1925. He learned the tailor craftsmanship with Albert Vermeersch and exercised the independent profession of tailor until 1965. From 1965 until his retirement he worked as a clerk at NCMV. Together with his wife Suzanne Lefever he has three children and in the meanwhile six grandchildren.

In 1950 he became fireman, and in 1954 he joined the buglers of the Last Post. This year he celebrates the incredible number of 55 years of service as a bugler! At the age of 84, he still stands full of great enthusiasm at the Menin Gate. For this he received already several decorations. In 2008 the Last Post Association received the Culture Award for the Flemish Community Volunteer.

Antoon Verschoot deserves the 2009 Cultural Trophy not only for his lifetime commitment as a volunteer bugler, but also as a 20 years loyal member of the Sint-Niklaas Male Choir, the founder of the Art Circle Hemian in 1994, and in 2006 he founded Anton Kunstkring, where he brings together like-minded people around painting. In short, a man of exceptional merit, liked by many and loving to be among the people, a man more than worthy to receive the Cultural Trophy! 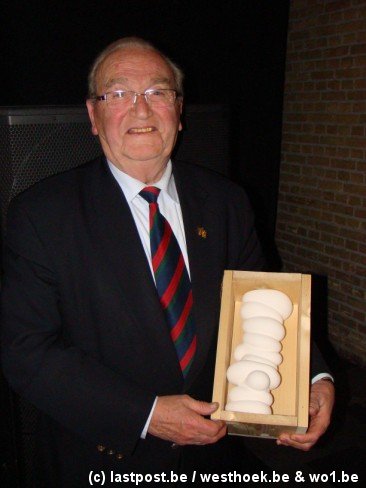