Former bugler Antoon Verschoot dies at the age of 91

Bugler for more than 61 years

On Wednesday, 1 February2017, Antoon Verschoot passed away in Ieper at the age of 91 years. Antoon was a bugler of the Last Post Association from 1954 until December 2015. For more than 61 years, he played the Last Post each evening with his colleagues under the Menin Gate in honour of the memory of the soldiers who died in Flanders during the First World War.

From 1954 to December 2015, Antoon Verschoot was a bugler of the Last Post Association. Together with his colleague-buglers, he played the Last Post some 15,000 times under the Menin Gate. Come rain or shine, he was always faithfully at his post at 8 o’clock each evening, from Monday to Sunday. Even during the weeks when he was not on duty, he still often came to support his fellow buglers and pay his respects to those who died for our freedom.

During his many years of dedicated service, he met many of the crowned heads of Europe: the British Queen Elizabeth, King Boudewijn and Queen Fabiola, King Albert and Queen Paola, King Filip and Queen Mathilde, Queen Beatrice of the Netherlands and many other princes and princesses from home and abroad. In addition, he was also introduced to many of the world’s great civil and religious leaders, including Pope John Paul II, Mother Theresa, Bob Geldof and many prime ministers and minsters from all around the globe. But no matter who he met, he was always ready with a smile and a few friendly words, before happily posing with them for the inevitable photograph. Everyone wanted to be in the picture with ‘Tone’, as he was universally known.

Honorary Chairman Guy Gruwez and Chairman Benoit Mottrie have both testified to his great dedication: “With his many years of commitment to the Last Post Association, Antoon was an unparalleled example of devotion to duty. He was always good-humoured and ready for a laugh and a joke, but when the clock on the Cloth Hall struck eight he was equally ready to perform his duty with the dignity and seriousness he always demanded of himself and the others in his team. With the passing of Antoon Verschoot, the Last Post Association has lost one of its leading figures. We owe an enormous debt of gratitude to Antoon and to his past and present colleagues. Our thoughts are in the first instance with his widow, Suzanne, his children, his grandchildren and his family. They have always supported Antoon throughout his many years of devoted service to the Last Post Association.”

This outstanding record was recognized with the award of various national and international decorations, including the British MBE and the Order of Australia. He was also a Knight in the Order of the Crown (Belgium). 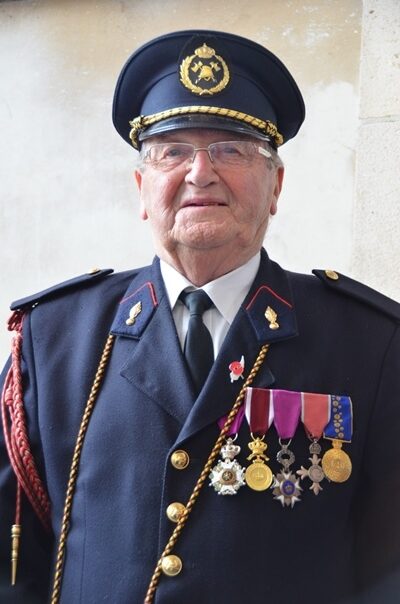