Unveiling of the Menin Gate Lions

In 1862, the City of Ieper decided to demolish the old Menin Gate, which had stood at this spot since medieval times. It was also decided that two stone lions – which had been removed from the ceremonial staircase leading to the Cloth Hall – should also be given a new home at this opening in the ramparts.

It was there that they still stood when war came to Ieper in 1914. During the next four years, thousands of soldiers, Australian and many other nationalities passed the lions on their way to the front.

For many, it was one of the last things they saw before meeting their destiny in the muddy battlefields of the Ieper Salient.

It has often been said of these soldiers that they, too, were like lions: lion-like in their courage, lion-hearted in their willingness to sacrifice their lives for what they believed to be a just cause. It is this courage and this sacrifice that we remember each evening in the Last Post Ceremony, tonight for the 30,655th time.

So we are honoured to see the Menin Gate lions back in their place, so that they can once again remind us of what we have lost, of what we share and of the debt we owe to these who paid the ultimate price to ensure that we might live in freedom.

We are grateful to the Australian War Memorial and the Government of Australia for making this historic occasion possible. It is a fitting tribute to the almost thirteen thousand Australian soldiers who died in Belgium during the Great War, and a reminder to the many Australian visitors who will attend our daily ceremony.

Of course, we will be sorry to see the lions go in November, when they return to Canberra, where they have found their second home since 1936. But even when they are no longer here, the spirit that they embody will remain with us, just as the spirit embodied by the soldiers of the Great War, whose names are engraved on the walls behind me.

This all underlines our common history that has made us what we are today, a history of which we all can rightly be proud. As proud as lions. 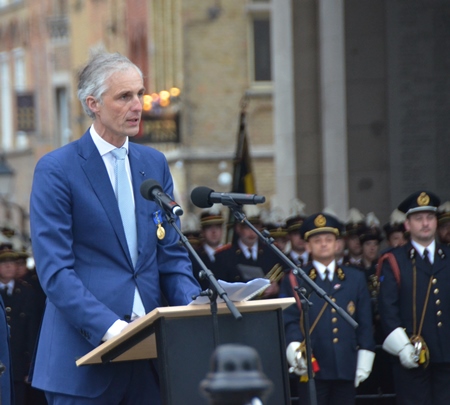