No traffic under the Menin Gate

City of Ieper, Last Post Association and Commonwealth War Graves Commission work together to optimize traffic flow and safety at the Menin Gate

During the past year and a half, there has been a noticeably strong increase in the number of visitors to Ieper and the front region. With the start of the 100th anniversary commemorations of the First World War in 2014 an even greater increase in visitor numbers is expected. The effects of this increase have already been felt at the Last Post Ceremony under the Menin Gate, but also at other locations within the city centre. In view of this, the city administration, the Last Post Association and the Commonwealth War Graves Commission, working in collaboration with the local police, have developed a plan to better control the flow of traffic and optimize the safety of the public at the Menin Gate.

During the past decade, the city administration has already introduced a number of measures designed to direct and control the traffic flow created by tourist coaches and private vehicles. Because the pressure of traffic on the city centre – and certainly at the Menin Gate on either side of the Last Post Ceremony – continues to rise, the relevant partners have now decided to introduce further measures to deal with this situation.

From now on (18/03/2014), the police will arrive at the Menin Gate at 19.30 every evening. Their task will be to close the road under the memorial and direct traffic to the alternative routes. By directing traffic away from the Menin Gate at an earlier, fixed time each evening, this will not only create a safer situation for people arriving early at the ceremony, but also offer greater clarity to local drivers and other vehicle users about the period of time when the road under the memorial cannot be used. Between 19.30 and 20.00 the officer on duty on the city centre side of the memorial will also stop traffic emerging from the Bollingstraat wherever a musical group or military detachment is marching to the Menin Gate from the Market Square – something that is happening with increasing frequency. Traffic emerging from the Bollingstraat will also be stopped from 20.00 until the end of the Last Post Ceremony, so that its proceedings are not disturbed.

Second dropping and collection point for passengers from tourist coaches

At the present time there is only one location in Ieper that is specially designed to allow tourist coach drivers to drop off and collect their passengers in the city centre; namely on the Vandenpeereboomplein, in front of St. Martin’s Cathedral. Coaches are permitted to park here for a maximum of 10 minutes. During the busiest periods, when there are numerous coaches each day, this area is monitored by the city’s traffic assistants. From this year, these assistants will be issued with red jackets emblazoned with the city’s coat of arms, making them more immediately recognizable. In the past, they only wore a badge as identification.

From 1 April at the latest, a second dropping and collection point for passengers will be available on the Hoornwerk, close to the Menin Gate. Between 08.00 and 19.30 every day, up to three coaches at any one time will be allowed to make use of this new facility. Parking for three coaches is also possible here between 19.30 and 20.30. At all other times stopping to drop off or collect passengers is limited to 10 minutes. To prevent drivers from staying longer than 10 minutes, this second dropping and collection point will be monitored as frequently as possible by the city’s traffic assistants. To make this feasible, the team of assistants will be significantly expanded in the near future. The second dropping and collection point should help to relieve traffic pressure on the city centre: fewer coaches will need to drive through the middle of the city and the Vandenpeereboomplein will be less busy than before. A targeted campaign will seek to inform tour operators and coach companies of the new arrangements and their benefits for all concerned. On busy days, it is not always possible for coach drivers to drop or collect their passengers on the ‘Leet’. The new alternative – close to the Menin Gate and just five minutes’ walk from the Market Square – will often be easier and more efficient both for them and (just as importantly) their passengers. It is the drivers who need to be persuaded to use the Hoornwerk instead of the Vandenpeereboomplein.

In April, the current 10 parking spaces for coaches along the Oudstrijderslaan will be increased by the addition of another 10 spaces on the car park of the NMBS (Belgian Railways) goods station. Following completion of the current programme of road and infrastructure improvements in the station area, the number of available places will be further increased to 25.

A handy folder with a summary of the traffic regulations for tourist coaches has been available for some time from the Tourist Office. At the end of March the new version will be sent digitally to all tour operators and coach companies listed in the database of the In Flanders Fields Museum. An accompanying mail will explain the advantages offered by the new dropping and collecting point. The printed version of the folder can be sent on request, but will be distributed first and foremost by the traffic assistants and the counter-staff working in the Tourist Office. 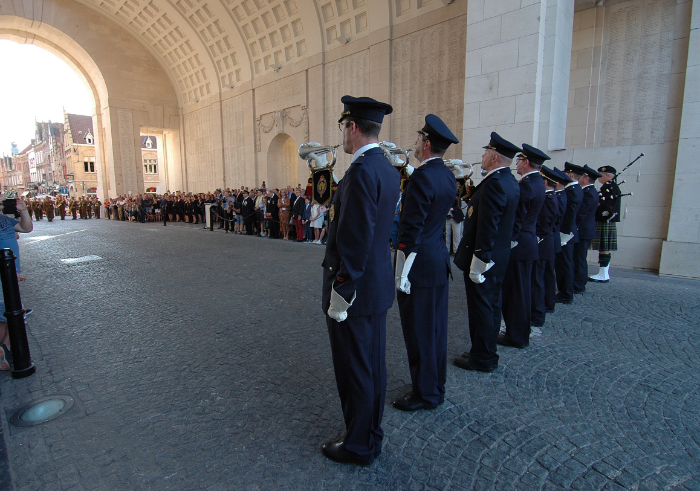