Events at Ieper and Zonnebeke

The end of the centenary commemorations of the First World War (2014-2018) will be marked during the weekend of 9-11 November 2018 by a number of special events in Ieper and Zonnebeke. Different partners have collaborated to develop a total programme that will proclaim the universal message of peace in a serene and respectful manner. This programme is an initiative of the Flemish Government in collaboration with the City of Ieper and the In Flanders Fields Museum, the Municipality of Zonnebeke and MMP 1917, the Last Post Association and Westtoer.

From August 2014 until August 2018, five old chairs from the church in Passendale, together with a register containing the names of 174,000 British and Irish victims of the First World War who died in Belgium, travelled to locations throughout England, Scotland, Wales, Northern Ireland and Ireland. At 23 different places it was possible for visitors to write down their personal stories and thoughts alongside the names in the register. From 23 August, this installation by the British artist Val Carman will be on display in the In Flanders Fields Museum. At half past five in the evening on 9 November, the five church chairs will be taken to the Astrid Park. There they will join chairs from 130 other countries where victims of the First World War in Belgium were born. Each chair will be accompanied by a candle-lit lantern, the glass door of which will bear the name of the country of origin and its distance from Ieper. This distance is symbolic for the journey made by the casualties between their birth and death, while the empty chairs represent the emptiness they left behind in the lives of their families and friends. The processional arrival and assembly of the chairs will be lit by 300 sugar-beet lanterns, of the kind that children traditionally hold to welcome St. Martin – the Flemish Santa Claus – to the city on 11 November. For the first time, this child’s celebration and the remembrance of the war dead will be combined in the same event.

Each year on 11 November, the Last Post Association organizes the concert ‘The Great War Remembered’ in the impressive setting of St. Martin’s Cathedral in Ieper. This concert turns the clock back 100 years to immerse the 1,800-strong audience in the atmosphere of the Great War. Instrumental and vocal music of the highest quality is combined with original First World War images to create a unique and moving experience, a musical evocation of the Great War that this year welcomes guest artists of international renown: Ralph McTell, Wannes Capelle and Piet Goddaer. The classic elements of the concert blend perfectly with these top artists and the playing of the highly respected Royal Ypriana Concert Band. The three concerts have been sold out.

In 2014, the Flemish Government approached Dirk Brossé, Jef Neve and Frederik Sioen to work together on the composition of a new work for this remembrance concert. The three composers – each with a different musical background – were asked to create a single piece, a hymn to commemorate what happened between 1914 and 1918. After much reading, historical research, frank discussion and fruitful interaction, they eventually found a theme on which they could all agree. And so Distortion, a Hymn to Liberty was born. The title speaks for itself. Ultimate freedom, both for individuals and nations, could only be achieved at the cost of distortion. People were torn away from everything they held dear and no longer knew the difference between up or down, good or bad. Even so, fighting for freedom, in itself a contradiction, was necessary at the time to survive. The result of this collaboration is a unique masterpiece, in which each composer has used his own musical style and language to make a personal contribution to this lyrical exploration of the themes of ‘peace and freedom’. Each composer worked in complete independence. The only thing that bound them together was their love for the expressive power of music and their respect for each other’s talent. The outcome is a mosaic of different atmospheres, gripping emotions and refined timbres.

Since 1928, the Last Post has been played each evening under the mighty vaults of the Menin Gate. This memorial, in the form of a triumphal Roman arch, bears the names of 54,896 missing soldiers of the then British Empire. Every day of the year and in all weathers, the buglers of the Last Post Association play this daily tribute to the fallen. At 11h on 11 November, an extra Last Post Ceremony will be held to commemorate the Armistice of 1918. At 20h there is the official Last Post. You can follow the Extra Last Post on a big screen on the marketsquare of Ieper. 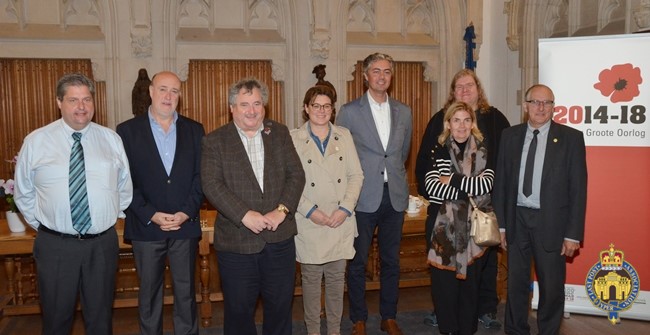