On Monday, 2 July 1928, at half past eight in the evening, the very first Last Post was played under the Menin Gate Memorial to the Missing. This was an initiative by the Association’s first chairman, Police Commissioner Pierre Vandenbraambussche, who gathered around him a group of like-minded local citizens with the aim of paying daily tribute to the soldiers of the Allied armies who had died in defence of the city during the First World War. Today, 93 years later, this daily ceremony of gratitude still takes place, on Friday, 2 July 2021 for the 31,185th time.

Chairman Benoit Mottrie: “The past year and a half has been particularly challenging for our organisation. The members of the Last Post team have done everything possible to ensure that the ceremony could continue to take place, with or without public, throughout the entire COVID-19 pandemic. I would like to thank them all for their unstinting efforts, without which this could not have been achieved. The Association also owes a similar debt of gratitude to our many stakeholders, both in Ieper and beyond.
After 93 years, we still stop and pause each evening to remember the sacrifice of so many thousands of soldiers in defence of our city and our freedoms. And we will continue to organise this daily moment of quiet reflection far into the future, so that what they did for us, now more than a century ago, will never be forgotten. Without them and their sacrifice, we would not enjoy the peace, freedom and prosperity that we value so highly today.”

The Last Post Association is delighted to welcome the Royal Ypriana Concert Band to its 93rd anniversary celebrations. The two organisations have worked together closely for decades and it is therefore more than appropriate that Ypriana should be the first band to attend the ceremony in more than a year, following the relaxation of the corona measures.

To coincide with its 93rd anniversary, the Last Post Association will launch its new website www.lastpost.be, which has been completely updated and renewed. This new website will allow visitors to quickly find all the information they need about the ceremony and how to attend and/or take part in it, as well as giving an interesting summary of the Last Post Association’s long and distinguished history. In addition, the website will also serve as a point of contact for everyone who is interested in our work and wishes to support its continuance. 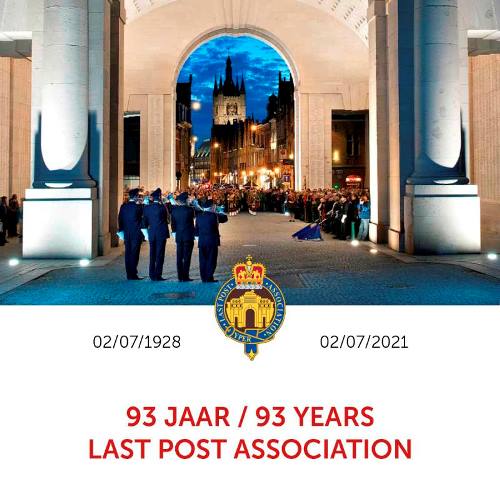